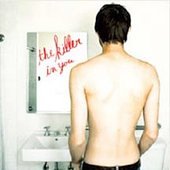 While listening to Pandora I heard a song that was a cover of The Smashing Pumpkins’s “Today” which I thought was really good.  I haven’t heard any covers of SP’s music before, so I checked and saw that it was off of a tribute album called The Killer in You.

After purchasing the album, I went straight to one of my favorite songs on the Siamese Dream album, Mayonaise.  The cover is by Emanuel, and I thoroughly enjoy how they did it, although I’ll always treasure the original version, which has special meaning to me growing up as a teen listening to their music.